The Navy is a step closer to achieving the vision of being able to fabricate parts on demand. Xerox and the Naval Postgraduate School (NPS) have announced a strategic research collaboration to advance 3D printing and additive manufacturing.

As part of a Collaborative Research and Development Agreement (CRADA) between NPS and Xerox, a Xerox ElemX Liquid Metal Printer has been installed at the school’s Large Experiment Annex on campus. NPS is the first site anywhere in the world to install this new technology.
“From the age of sail to the nuclear era, Sailors have been fixing things at sea so they can complete the mission, said NPS President retired Vice Adm. Ann Rondeau. “This partnership is about the strategic ability of the Navy to have Sailors on ships with the capability through creativity and technology to advance their operations at sea. Through collaboration, NPS and Xerox, with the support of the NPS Alumni Association and Foundation (NPSAAF), are helping build a Navy for the 21st Century.”

With access to the ElemX liquid metal printer and other state-of-the-art additive manufacturing equipment, NPS faculty and students will be able to design and create  on-demand items as part of thesis research.

Creating parts when needed not only contributes to readiness, but also reduces reliance on lengthy, complex logistics chains.
“Global supply chains leave industries like aerospace, automotive, heavy equipment, and oil and gas vulnerable to external risks,” said Tali Rosman, Xerox Vice President and General Manager, 3D Printing. “Our goal is to integrate localized 3D printing into their operations, and the real-time feedback from NPS gives us actionable data to continuously improve the ElemX.”

The CRADA agreement benefits the naval service as well as Xerox. “The military supply chain is among the most complex in the world, and NPS understands first-hand the challenges manufacturers must address,” said Xerox Chief Technology Officer Naresh Shanker. “This collaboration will aid NPS in pushing adoption of 3D printing throughout the U.S. Navy, and will provide Xerox valuable information to help deliver supply chain flexibility and resiliency to future customers.”

According to retired U.S. Marine Corps Col. Todd Lyons, NPSAAF vice president, providing the right digital tools and the liquid metal printer has helped transform the supply chain, as well as how the Department of Defense (DoD) thinks operationally about supplying war. “This is one way to bend the cost curve so that the DoD is not spending a thousand dollars for every dollar that a peer competitor spends,” Lyons said. 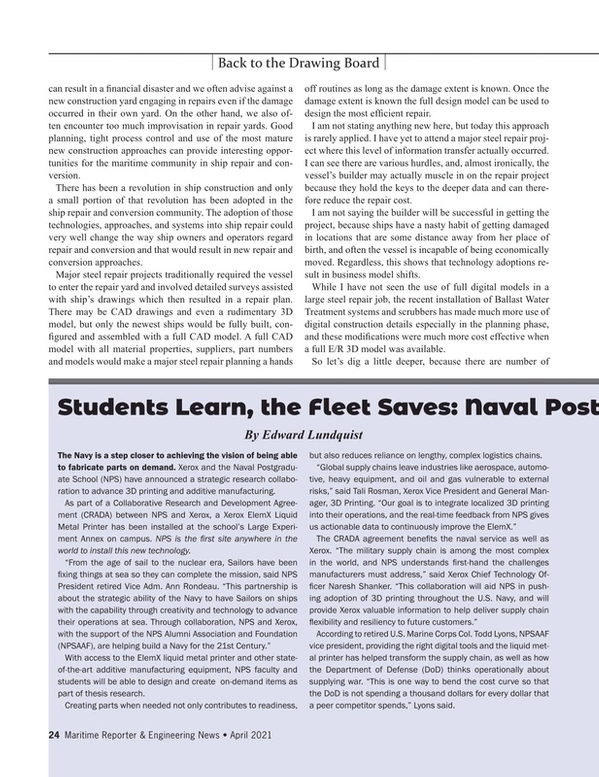 Other stories from April 2021 issue